on September 27, 2010
Since my wedding I was planning a trip to Laxmi Narayan - Khalapur, our family deity. Finally I managed to visit Khalapur on September 19, 2010.

We reached Shivaji nagar (Pune) railway station at 6:15 AM and were waiting for our 6:30 AM local for Lonavala. 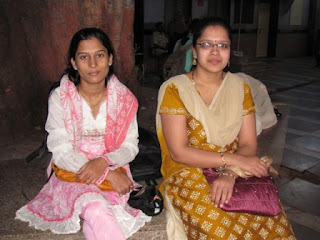 I could not have my morning tea as I had to leave early. But it was fun waiting with my family at railway station. 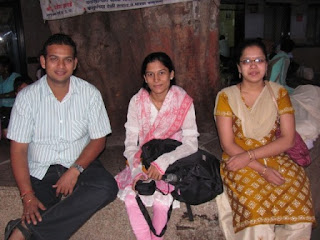 After a long time I enjoyed standing in the door watching the engine on the turning track. It was fun. Now I feel it was too childish act on my part. But I was enjoying that.

We reached Lonavala railway station at around 8:00AM. 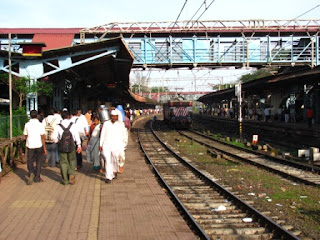 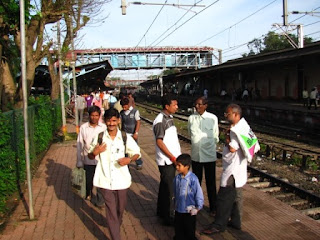 We walked the over-bridge to get on the other side of the railway station. Then we went to Lonavala bus stand to catch bus for Khopoli. We got freshed and quickly got bus, a mini bus. 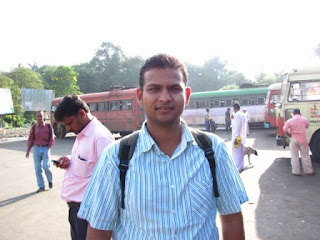 Even the bus was not crowded. I think there would not be many people going out of Lonavala on weekend. 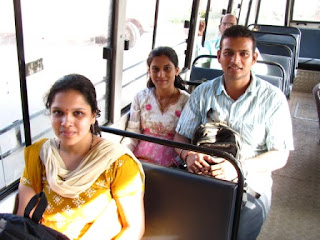 It was great journey. The route to Khopoli was through Pune-Mumbai Express Way. We were on Express Way just after leaving Lonavala. There is by-pass on Express Way for Khopoli. The scene outside through bus was catchy. 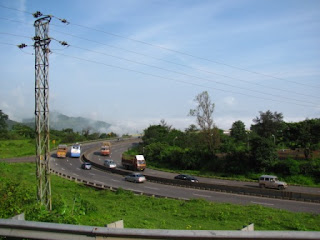 There was a famous suicide point too on Express Way. On the wall it was written that 'येथून उडी मरू नये' means 'don't jump from here'. 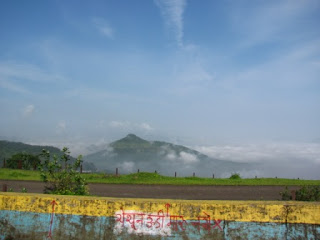 In next 20 minutes we were at Khopoli phata, also known as 'Shil phata'. We had to catch six-seater for Khalapur from there. As there was no auto rickshaw around that time I knew that we will have to wait for a while. Meanwhile, we had family photos. 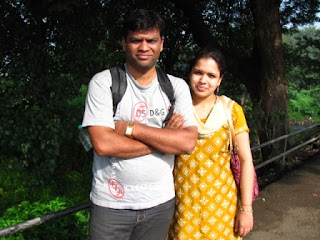 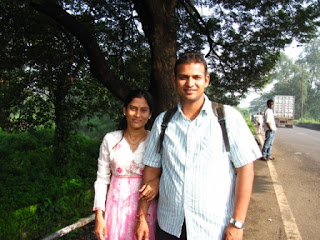 I didn't know that the auto rickshaw stand has moved by 100 meters. Now you can get rickshaws at the other end of the bridge towards Khalapur-Karjat.

We got rickshaw at the other end but our sizes could not fit easily in the rickshaw. I had to make my brother sit in my lap to make some space. It was dare adventure for me which lasts for 15 minutes. Our wives were laughing seeing my hard time. 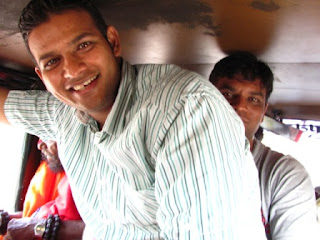 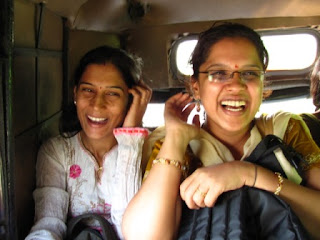 The road was good and hence I didn't face much problem lifting my brother. 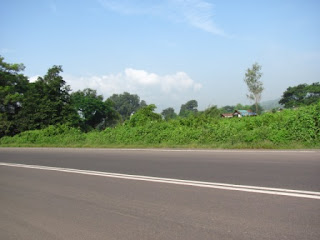 The six seater dropped us till Khalapur phata. We had to walk from there till deity temple. It was around 1.5 Kms walk. 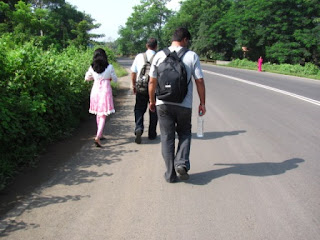 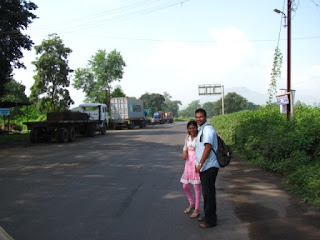 While we reached the turn towards the main area of city off the highway we saw a small hotel. We had a great breakfast there. We were so hungry that we ate 6 plates of fritters (भजी). The test was awesome. 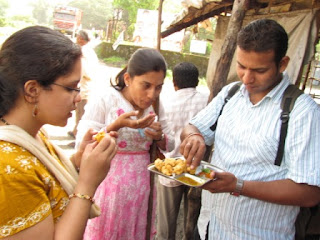 Finally after having stomach full we went to our family deity temple, Laxmi Narayan Sansthan Khalapur. The idols dressed in golden dress and were looking gorgeous. 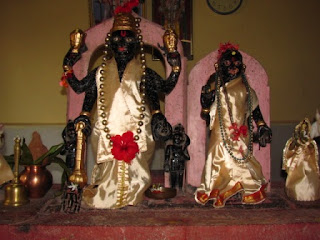 We also played football in temple corridor. There were 2-3 local kids who accompanied us in the play. In fact, they approached us and asked whether we want to play. My brother readily accepted the offer and we went on playing football in that small area. 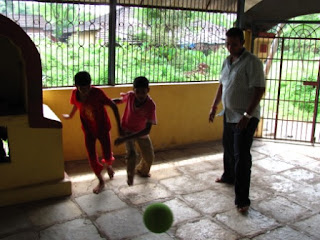 The same kids took us to their homes. One of the kid happened to be the son of our acquaintance who used to take care of the temple. Now, Sanjay Mulekar is the new care taker for the temple. The mom of that kid gave us this piece of information. The boys went on showing us the kittens. We played with themand  had coffee. 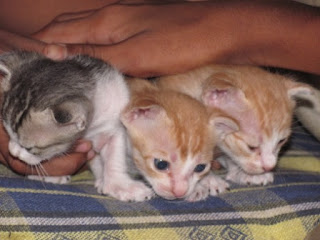 Mr. Sanjay, new care taker, dropped us till Khopoli stand in his car. Many thanks to him. 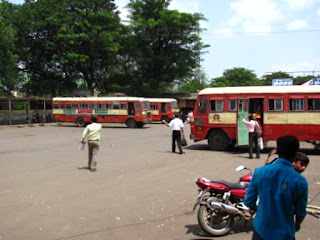 We had sugarcane juice at Khopoli stand. We didn't had our lunch that day. Fritters were still full in our stomachs. 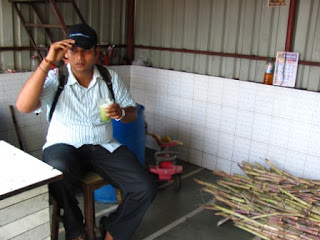 The patch from Khopoli to Lonavala is full of greenery and natural resources. 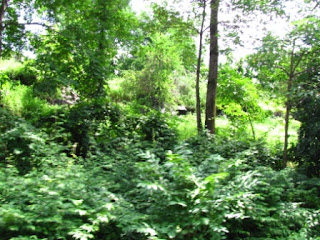 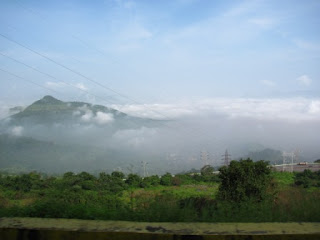 We caught train to Pune from Lonavala station. Reached Pune in evening time. It was a great trip to Khalapur.

The first thing that any couple does immediately after their marriage is go for a 'honeymoon'. It is almost 6 months since I am carrying tag of 'husband' but unfortunately could not go out with my wife. I didn't have enough leaves to go for honeymoon after my wedding. So we had decided then that we will have it in parts like Harry Potter movies. So this weekend we went for our first part of Honeymoon.
Saturday morning we left at around 9:00 AM for The Lake Weekend resort. This is the parking area of my building.


The resort is near Varasgaon dam. The route is Sinhagad road - Khadakwasala dam - Panshet - Varasgaon boat club. The picture taken while running besides Khadakwasla dam.


My wife, Meet, trying catch herself in portrait while I was driving my Pulsar 150 towards resort. She is wearing cap that my MBA college gave me when I went there to meet my juniors last year.

It is a perfect ride on weekend if one loves beautiful scenery and enjoys cool breeze.

If you are thinking of starting up a e-newsletter activity at corporate level then below are few tips that might help you in the course. I have divided a newsletter activity in three phases viz. planning, construction and distribution.

The name of the newsletter should grab attention of the audience. If your brand is highly recognizable in your business community then only use that name. If that is not the case then use any other name that will represent the aim of your newsletter. For example, if you are starting a newsletter for cloud services then have the name something as ‘Envisioning the Cloud’.

It is not always possible to have different newsletters for different segments of your market due to budget and resource constraints. In that case you will have to choose your first market segment that you will serve as a pilot campaign. Based on its success you can go on adding segments in current newsletter or sta…

Three learning I got after losing Rs. 50

I learnt few important lessons for my life at cost of Rs. 50 at Funfair organized at our company.

The event was organized for raise money for charity. All the revenue collected through this would go to NGO so I had set my own budget apart from our team contribution to support NGO financially. But interestingly I got to learn few important things.

I was playing Below 7 or Above 7 game. In this game you have to just guess the total of two dices thrown. If you win you get double of your bet. Before play I had done my homework and decided to bet for below 7 all time since the probability of win is 50% statistically so it was the safe move per say. But when I played my belief and faith in statistics based decision got tossed.

Decisions based on stats only is not a good way to go with - My play strategy was solely based on statistical analysis yet I lost money.Go with your heart - Many times during play I disobeyed my internal voice and got ruinedFailure doesn't sadden alw…